I make Human Design & deconditioning simple and practical with empowering language and tools.

The Best Brene Brown Quotes on Shame, Vulnerability, and Courage

My Human Design content is always written through my heretical + alchemical lens. It may or may not align with traditional HD views. And this post may contain affiliate links. If you purchase after clicking one of my affiliate links, I may make a commission. 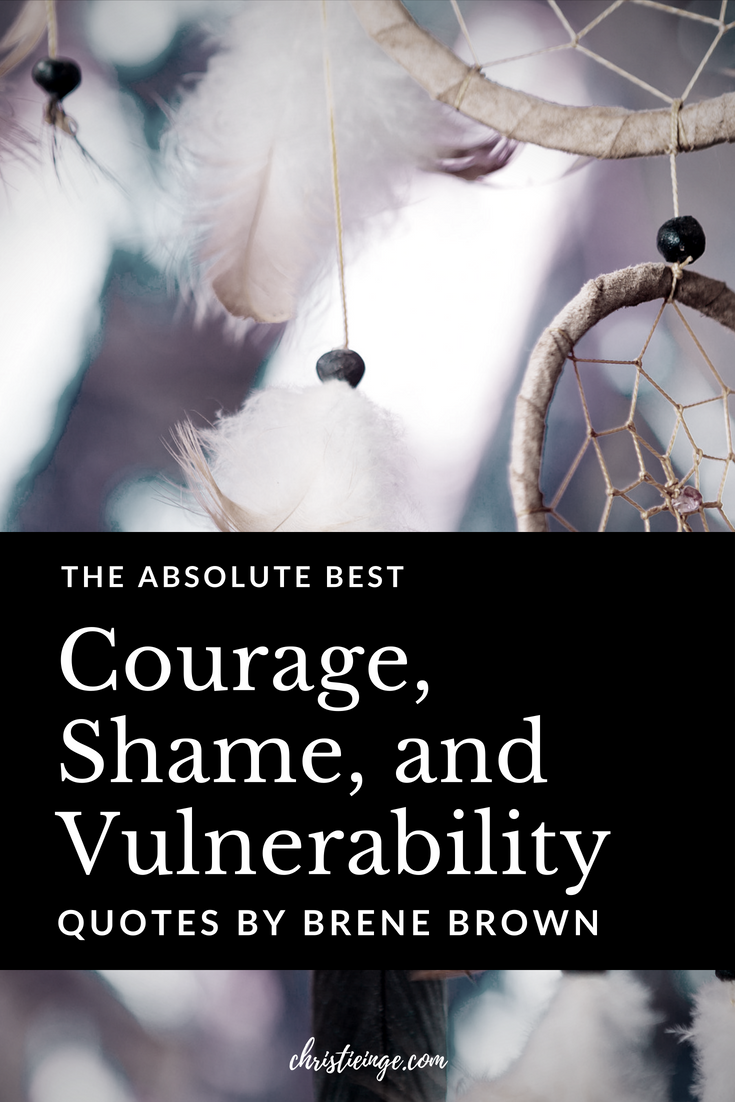 As the title suggests, today, I’ve got a collection of my favorite Dr. Brene Brown quotes on shame, vulnerability, and courage. I’m also throwing in some quotes on empathy and boundaries because she has some lovely thoughts on those, too.

In case you aren’t aware, Dr. Brene Brown is the worlds leading researcher on shame, vulnerability, courage, and empathy. She is a Research Professor at the University of Houston and is a #1 New York Times bestselling author of multiple books.

So far, she has written four books:

She also has an audio program called Men, Women, and Worthiness which is also fantastic. I wholeheartedly recommend all of them.

I am a HUGE fan of her work because she opened up a much-needed global conversation about shame, which up until this point was a topic that most humans have avoided like the plague (many still do!). But shame is a feeling that all humans experience and has so much wisdom when we go into it, instead of avoiding it. There is no reason to feel ashamed of feeling shame.

So, without further ado, here are my favorite Dr. Brene Brown quotes:

Shame, blame, disrespect, betrayal, and the withholding of affection damage the roots from which love grows. Love can only survive these injuries if they are acknowledged, healed and rare.

You are imperfect, you are wired for struggle, but you are worthy of love and belonging.

Because true belonging only happens when we present our authentic, imperfect selves to the world, our sense of belonging can never be greater than our level of self-acceptance.

If we can share our story with someone who responds with empathy and understanding, shame can’t survive.

Numb the dark and you numb the light.

Shame derives its power from being unspeakable.

We live in a world where most people still subscribe to the belief that shame is a good tool for keeping people in line. Not only is this wrong, but it’s dangerous.

Those who feel lovable, who love, and who experience belonging simply believe they are worthy of love and belonging.

We judge people in areas where we’re vulnerable to shame.

Owning our story can be hard but not nearly as difficult as spending our lives running from it. Embracing our vulnerabilities is risky but not nearly as dangerous as giving up on love and belonging and joy—the experiences that make us the most vulnerable. Only when we are brave enough to explore the darkness will we discover the infinite power of our light.

We cultivate love when we allow our most vulnerable and powerful selves to be deeply seen and known, and when we honor the spiritual connection that grows from that offering with trust, respect, kindness and affection.

Vulnerability is the birthplace of innovation, creativity and change.

If we want greater clarity in our purpose or deeper and more meaningful spiritual lives, vulnerability is the path.

Our willingness to own and engage with our vulnerability determines the depth of our courage and the clarity of our purpose; the level to which we protect ourselves from being vulnerable is a measure of our fear and disconnection.

To love ourselves and support each other in the process of becoming real is perhaps the greatest single act of daring greatly.

Vulnerability is not knowing victory or defeat, it’s understanding the necessity of both; it’s engaging. It’s being all in.

Fitting in and belonging are not the same thing. In fact, fitting in is one of the greatest barriers to belonging. Fitting in is about assessing a situation and becoming who you need to be in order to be accepted. Belonging, on the other hand, doesn’t require us to change who we are; it requires us to be who we are.

Vulnerability is based on mutuality and requires boundaries and trust. It’s not oversharing, it’s not purging, it’s not indiscriminate disclosure, and it’s not celebrity-style social media information dumps. Vulnerability is about sharing our feelings and our experiences with people who have earned the right to hear them.

Courage is a heart word. The root of the word courage is cor – the Latin word for heart. In one of its earliest forms, the word courage meant “To speak one’s mind by telling all one’s heart.” Over time, this definition has changed, and today, we typically associate courage with heroic and brave deeds. But in my opinion, this definition fails to recognize the inner strength and level of commitment required for us to actually speak honestly and openly about who we are and about our experiences — good and bad. Speaking from our hearts is what I think of as “ordinary courage.

Courage starts with showing up and letting ourselves be seen.

The willingness to show up changes us, It makes us a little braver each time.

Only when we’re brave enough to explore the darkness will we discover the infinite power of our light.

Don’t try to win over the haters; you’re not the jackass whisperer.

Shame resilience is the ability to say, “This hurts. This is disappointing, maybe even devastating. But success and recognition and approval are not the values that drive me. My value is courage and I was just courageous. You can move on, shame.

Those who have a strong sense of love and belonging have the courage to be imperfect.

Faith is a place of mystery, where we find the courage to believe in what we cannot see and the strength to let go of our fear of uncertainty.

Empathy’s the antidote to shame. The two most powerful words when we’re in struggle: me too.

When two people relate to each other authentically and humanly, God is the electricity that surges between them.

Self-compassion is key because when we’re able to be gentle with ourselves in the midst of shame, we’re more likely to reach out, connect, and experience empathy.

Empathy has no script. There is no right way or wrong way to do it. It’s simply listening, holding space, withholding judgment, emotionally connecting, and communicating that incredibly healing message of ‘You’re not alone.’

I believe that what we regret most are our failures of courage, whether it’s the courage to be kinder, to show up, to say how we feel, to set boundaries, to be good to ourselves. For that reason, regret can be the birthplace of empathy.

Living a connected life ultimately is about setting boundaries, spending less time and energy hustling and winning over people who don’t matter, and seeing the value of working on cultivating connection with family and close friends.

Daring to set boundaries is about having the courage to love ourselves even when we risk disappointing others.

When we fail to set boundaries and hold people accountable, we feel used and mistreated.

Vulnerability is based on mutuality and requires boundaries and trust.

Understanding the connection between boundaries, accountability, acceptance, and compassion have made me a kinder person.

Well, there you have it. My favorite Dr. Brene Brown quotes on shame, vulnerability, courage, boundaries, and empathy. I hope that they have inspired you to heal the shame you are holding onto so that you can move forward with vulnerability, courage, and empathy. And if you haven’t already, be sure to check out Dr. Brene Brown’s books and audio programs.

Do you want a deep dive on your Human Design type + strategy, authority, profile, and all four gates of your incarnation cross? PLUS get unlimited access to Q + A and deconditioning support? If so, you’re going to LOVE the Human Design Map. Buy yours here.

PrevPreviousHow To Forgive Someone Who Hurt You
NextWhat To Do When The Going Gets Tough on Your Self Love JourneyNext
17.1K shares